The History of Condee

Started with one man and one truck

In the late 1950s, Don Condee built and was part owner of a couple of radio stations in the St. Louis area. "We exchanged advertising tradeouts with some of our clients," said Don. "It worked like the bartering system. That was how we originally started coming to Florida."

They stayed in a hotel owned by clients at Lauderdale by the Sea, and wintered in Florida for the next 10 years before making the Marco connection.

Ed Husted, an old high school friend who lived in Springfield, Ill., not far from Mount Sterling, was selling lots on Marco for Deltona. Ed's job was to round up potential customers and take them to see Marco. He knew Don was flying his plane down to Florida on trips.

"Husted started flying down with me and brought some of his clients that were looking for a vacation place on Marco. I made about $75 a head, and that helped with expenses," said Don, who ended up buying a condominium on Marco around 1964.
Condee's LP Gas and LP Utility, in Mount Sterling, Ill., operated as two separate businesses. After running them separately for several years, Don decided to combine them. His father ran a small refrigeration business that Don took over and built up. The company installed refrigeration in several apple storage houses around Illinois. A big account was Prairie Farms, in western Illinois, where they installed refrigerated milk tanks for dairy farmers in the area.

When natural gas came to Mount Sterling, Condee stripped out all their old equipment. "I had 300 meters from the old system," said Don. "I heard Marco was putting in propane and thought that would be a good place to sell our equipment, but they weren't interested." In 1969, Don asked George Hess, who had worked for the company in Mount Sterling for 11 years, if he would like to move to a warm location and start a branch of Condee Cooling and Electric on Marco Island. "George agreed and took one of the company trucks to Marco," Don recalled.

Don flew back and forth in his plane every couple weeks, checking on the new business and bringing supplies. "Deltona had installed all the electric and air conditioning in their homes. Their employees were unionized and were gone by late afternoon," said Don. "That opened the door up for us to service their equipment. Homeowners on Marco who had problems after 3:30 p.m. were out of luck until we came along. Hess got calls at 11 or 12 at night and was ready to help customers 24 hours a day. Not living on Marco at the time really taught me that the best way to run a business is to have one location to operate it properly." 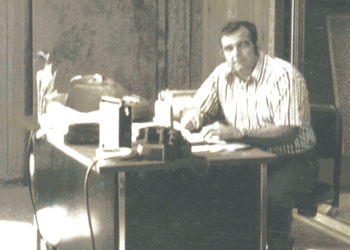 When the business began to grow, Don Condee purchased some land across from Marco Lake and built Condee Cooling and Electric, Inc. The company has about 45 employees, including Don's daughter, son and grandson. Don's wife, Mary Lou, worked in the business for several years and is now retired. Now, Mary Lou's son, daughter-in-law Michele and a granddaughter all work for Condee.
"You can call it a family- owned and operated business," says Don's daughter, Charlotte Husted, who married her dad's high school friend Ed's son. She works as a dispatcher in the company.
Greg Schneider, Eddie Freese, Debbie Lee and so many employees have been with the company for several years. Don, who works at least six hours a day either at the office or from the home, says one of his main jobs is putting out fires. Don, an only child, was born in 1928 in McComb, Ill. "My mom was from a family of 11," said Don, who speculated that is why he was an only child. "My mom worked at Marshall Fields Department Store in Chicago as a hat maker. That's where she met my dad," he said. Don attended Eureka College, about 20 miles from Peoria, Ill. "I mainly went there because my high school principal went there and was a roommate of Ronald Reagan," he said.

The Condee Restaurant, in Mount Sterling, was another big part of the Condee family for over 75 years. The restaurant was started by Don's grandfather and passed to his father and mother and then to Don in the mid '50s. The restaurant served as a rest stop for buses and serviced all the civic clubs in town. "We never even served a drop of liquor," said Don, who ran it for 10 years in addition to his other business. Don and Mary Lou bought a Sunbrella home from a Dr. Nelson in 1980, with deepwater access directly out to the Marco River. "We've had our 41-foot Hatteras for 15 years now," said Don.

One of Don and Mary Lou's favorite pastimes on their boat is deep sea fishing and diving in the Keys with grandson Eric and sons Donnie and Brett. Their boat has an electric compressor with a hooka line that gives them a chance to jump over with masks and weight belts and scout the area before gearing up to dive for lobster or reef diving. One of the longest trips they have taken on their boat is to Conception, in the Bahamas, across from Georgetown.
"I probably have 3,500 hours on it now, but wore out another engine," said Don. "I remember heading home to Marco and hitting a bad storm north of Cape Romano about seven years ago," Don said, remembering the time lightning hit the boat. "The noise was deafening as it hit the radar and exploded."

Don who was sitting at the helm remembers: "All we had left to get us home was a compass and a handheld radio." Nowadays, Don and Mary Lou like cruises and their one trip a year to Las Vegas to see the shows. "We were there two nights before Seigfreid and Roy had their accident," said Don, as he described how close their seats were to the tigers. "We made a point of going there every time we went to Vegas. We probably saw one of the very last shows."

Between Don and Mary Lou, they have six children, 10 grandchildren and five great grandchildren. Boating is one of their favorite pastimes: They also enjoy having friends over to sit on the lanai or go out with them on their boat.
"I wish Marco could have stayed slower," said Don, referring to all the changes. "It just has such a concentration of houses now. I am amazed at what people are paying for property."