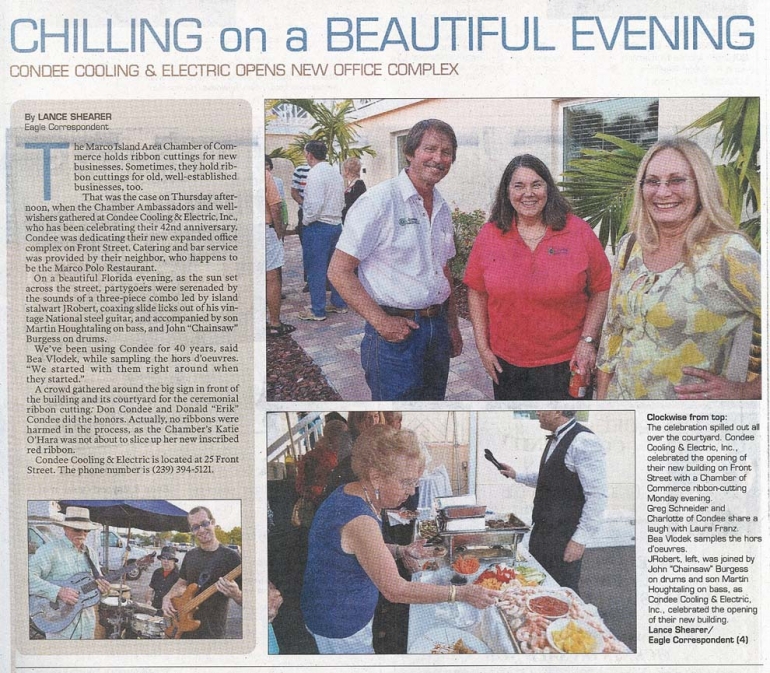 That was the case on Thursday afternoon, when the Chamber Ambassadors and well-wishers gathered at Condee Cooling & Electric, Inc., who has been celebrating their 42nd anniversary. Condee was dedicating their new expanded office complex on Front Street. Catering and bar service was provided by their neighbor, who happens to be the Marco Polo Restaurant.

On a beautiful Florida evening, as the sun set across the street, partygoers were serenaded by the sounds of a three-piece combo led by island stalwart JRobert, coaxing slide licks out of his vintage National steel guitar, and accompanied by son Martin Houghtaling on bass, and John "Chainsaw" Burgess on drums.

"We've been having Condee come for 40 years," said Bea Vlodek, while sampling the hors d'oeuvres. "We started with them right around when they started."

A crowd gathered around the big sign in front of the building and its courtyard for the ceremonial ribbon cutting. Don Condee and Donald "Erik" Condee did the honors. Actually, no ribbons were harmed in the process, as the Chamber's Katie O'Hara was not about to slice up her new inscribed red ribbon.